Pravas, a newly opened restaurant at Kamala Mills, Lower Parel has been the buzz of the town lately because of its unique setup. I finally got a chance to visit them this weekend and here I am with my review! Keep reading to find out if Pravas is worth all the talk! 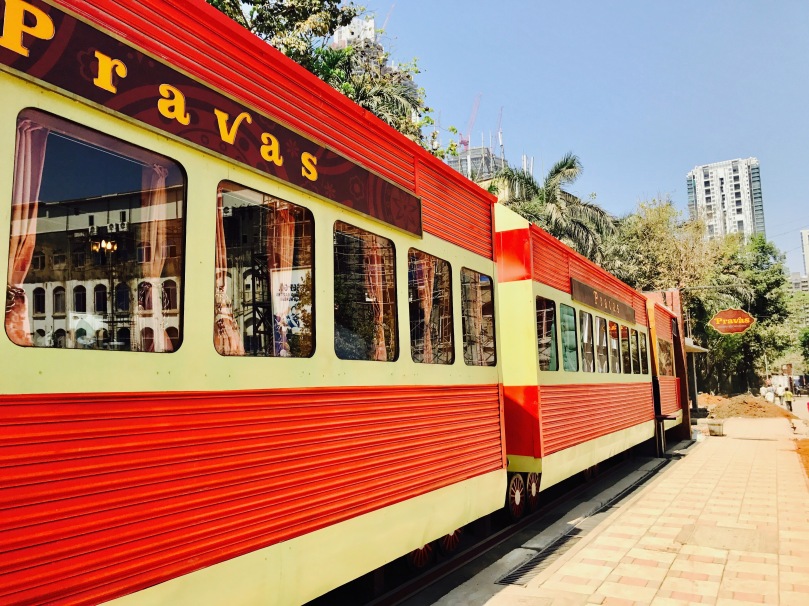 The USP of this restaurant is its train setup, which is something remarkably new in town! It adds a fun element to the entire place and makes the whole experience special! The décor and ambiance just adds a very positive vibe to the restaurant.

Coming to the food, they offer authentic regular as well as jain Gujarati thalis. I went on a Sunday and this is what was on their menu: 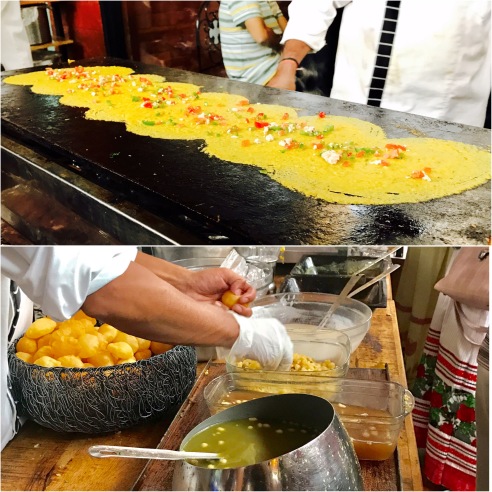 In farsan, I absolutely loved the kand ni pattice, which had a stuffing made out of peas and the covering was nice and crunchy. The paneer yogi tikka had a mayonnaise dressing on top and it was good, but nothing special. I did not like the moong dal bhajiya and kadi since the bhajiya was quite hard and the kadi was average too!

Coming to the main thali, my favourite subzi was makai moong vadi nu shaak, which had corn and a lovely gravy made of tomatoes and onions. Ringna na olo which was essentially baingan ka bharta, was delicious and had a nice smokiness to it! Sofiyani paneer was something different than most paneer subzis available in restaurants, it had a white gravy and was really tasty. My second favourite out of all the subzis was litchi kofta, the kofta was really soft and the gravy was nice and tangy. Dal panchmela was quite good as well. The kadi (somehow not mentioned in the menu) was extremely sweet for my liking!

Coming to the breads, phulka roti was the normal wheat roti we have at home. Bajra roti was the best of the lot, while methi thepla was thin yet a bit hard!

They had only two options for rice, which included the usual steamed rice and the mix dhan khichadi was average and surprisingly had corn in it!

In dessert, puran poli was amazing; it wasn’t too sweet but just perfect! The consistency of dry fruit basundi was too thin and it was no good. Dal badam shira was pretty good too!

Now onto the service, the waiters seemed really confused and when asked about a particular item, they had to take a look into the menu themselves to give me an answer! The service was certainly not up to the mark and needs a lot of improvement.

The weekend thalis are priced at Rs.700 whereas, the weekday thalis cost Rs.500. 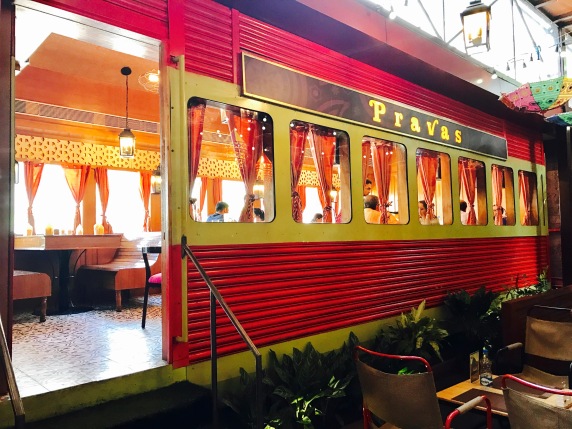 Overall, Pravas is a decent restaurant; I’ve had much better thalis in Mumbai! But you definitely need to try it out once just for the ambiance and the experience of eating in a train setup!

Do you plan to visit Pravas on your next day out with family? What do you think of the train setup? Comment below with your views!